The Barber of Seville Florida Grand Opera by Cesare Sterbini 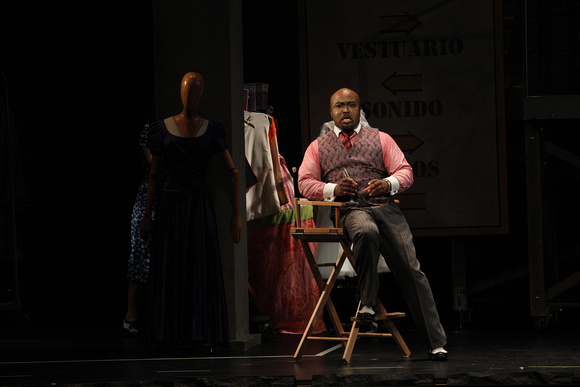 The Barber Of Seville Florida Grand Opera by Cesare Sterbini

The Barber of Seville, or The Useless Precaution (Italian: Il barbiere di Siviglia, ossia L'inutile precauzione [il barˈbjɛːre di siˈviʎʎa osˈsiːa liˈnuːtile prekautˈtsjoːne]) is an opera buffa in two acts by Gioachino Rossini with an Italian libretto by Cesare Sterbini. The libretto was based on Pierre Beaumarchais's French comedy Le Barbier de Séville (1775). The première of Rossini's opera (under the title Almaviva, o sia L'inutile precauzione) took place on 20 February 1816 at the Teatro Argentina, Rome.
Rossini's Barber has proven to be one of the greatest masterpieces of comedy within music, and has been described as the opera buffa of all "opere buffe". After two hundred years, it remains a popular work.
Composition history
Rossini's opera recounts the events of the first of the three plays by French playwright Pierre Beaumarchais that revolve around the clever and enterprising character named Figaro, the barber of the title. Mozart's opera The Marriage of Figaro, composed 30 years earlier in 1786, is based on the second part of the Beaumarchais trilogy. The first Beaumarchais play was originally conceived as an opéra comique, but was rejected as such by the Comédie-Italienne.[3] The play as it is now known was premiered in 1775 by the Comédie-Française at the Théâtre des Tuileries in Paris.[4]
Other operas based on the first play were composed by Giovanni Paisiello (his Il barbiere di Siviglia premiered in 1782), by Nicolas Isouard in 1796, and then by Francesco Morlacchi in 1816. Though the work of Paisiello triumphed for a time, only Rossini's version has stood the test of time and continues to be a mainstay of operatic repertoire. On 11 November 1868, two days before Rossini's death, the composer Costantino Dall'Argine (1842–1877) premiered an opera based on the same libretto as Rossini's work,[5] bearing a dedication to Rossini.[6] The premiere was not a failure, but critics condemned the "audacity" of the young composer and the work is now forgotten.
Rossini was well known for being remarkably productive, completing an average of two operas per year for 19 years, and in some years writing as many as four. Musicologists believe that, true to form, the music for Il barbiere di Siviglia was composed in just under three weeks,[8] although the famous overture was actually recycled from two earlier Rossini operas, Aureliano in Palmira and Elisabetta, regina d'Inghilterra and thus contains none of the thematic material in Il barbiere di Siviglia itself.

Performance history
The premiere of Rossini's opera at the Teatro Argentina in Rome[9] was a disaster: the audience hissed and jeered throughout, and several on-stage accidents occurred.[8] Furthermore, many of the audience were supporters of one of Rossini's rivals, Giovanni Paisiello, who played on mob mentality to provoke the rest of the audience to dislike the opera.[8] Paisiello had already composed The Barber of Sevilleand took Rossini's new version to be an affront to his version. In particular, Paisiello and his followers were opposed to the use of basso buffo, which is common in comic opera.[10] The second performance, however, was successful.[8] The original French play, Le Barbier de Séville, had a similar story: poorly received at first, only to become a favorite within a week.
The opera was first performed in England on 10 March 1818 at the King's Theatre in London in Italian, soon followed on 13 October at the Covent Garden Theatre by an English version translated by John Fawcett and Daniel Terry. It was first performed in America on 3 May 1819 in English (probably the Covent Garden version) at the Park Theatre in New York.[11] It was given in French at the Théâtre d'Orléans in New Orleans on 4 March 1823,[12] and became the first opera ever to be performed in Italian in New York, when Manuel Garcia (who played Almaviva) and his Italian troupe opened their first season there with Il barbiere on 29 November 1825 at the Park Theatre. The cast of eight had three other members of his family, including the 17-year-old Maria-Felicia, later known as Maria Malibran.[13]
The role of Rosina was originally written for a contralto. According to music critic Richard Osborne, writing in The New Grove Dictionary of Opera, "it is important to record the degree to which singers have sometimes distorted Rossini’s intentions. The most serious distortion has been the upward transposition of the role of Rosina, turning her from a lustrous alto into a pert soprano."[14] However, it has also been noted that Rossini, who frequently altered his music for specific singers, wrote a new aria for the second act for Joséphine Fodor-Mainvielle, a soprano who had sung Rosina in the 1818 London premiere, and sang the new aria c. 1820 at the Théâtre-Italien in Paris, where it was published.[15]
The singing lesson in act 2 has often been turned into "a sh
Daniel Azoulay and Florida Grand Opera
Powered by ZENFOLIO User Agreement
Cancel
Continue