The Passenger (Russian: Пассажирка(Passazhirka)) is a 1968 opera by Mieczysław Weinberg to a Russian librettoby Alexander Medvedev. It was premiered by musicians of the Stanislavsky Theatre in the Svetlanov Hall of the Moscow International House of Music on December 25, 2006, in a semi-staging conducted by Wolf Gorelik. The cast included Anastasia Bakastova as Katya, Natalia Muradimova as Marta, Natalia Vladimirskaya as Liza, Alexey Dolgov as Valter and Dmitry Kondratkov as Tadeush.
Medvedev's libretto is based on the 1959 Polish radio play Pasażerka z kabiny 45(Passenger from Cabin Number 45) by concentration-camp survivor Zofia Posmysz. The play was rewritten in 1962 by its author as a novel, Pasażerka. Posmysz also worked with Andrzej Munk on the screenplay for his related, posthumously finished 1963 film Pasażerka. Medvedev's libretto was reworked in 2010 for the first staged performance of the opera at the Bregenzer Festspiele into German, English, Polish, Yiddish, French, Russian and Czech.


Performance history
Originally scheduled to be performed at the Bolshoi in 1968, the opera was not premiered until December 25, 2006, when it received a semi-staging by musicians of the Stanislavsky Theater in Moscow. The first full staging took place in 2010 at the Bregenzer Festspiele, directed by David Pountney, with a set design by Johan Engels. Teodor Currentzis conducted the Wiener Symphoniker and the Prague Philharmonic Choir. The July 31 performance was filmed and released on DVD and Blu-ray. The same production was presented in Warsaw by Polish National Opera in 2010[6] and received its UK première on 19 September 2011 at the English National Opera(broadcast live on BBC Radio 3 on 15 October). In 2013, it was performed in Germany for the first time at Badisches Staatstheater in Karlsruhe. The Passengerreceived its American premiere on January 18, 2014, at Houston Grand Opera. The opera has also premiered at the Lyric Opera of Chicago and at the Frankfurt Opera(Germany), both in early 2015 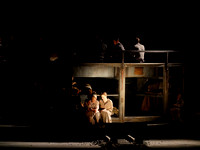