PICKS FOR BRENDAN FROM DA 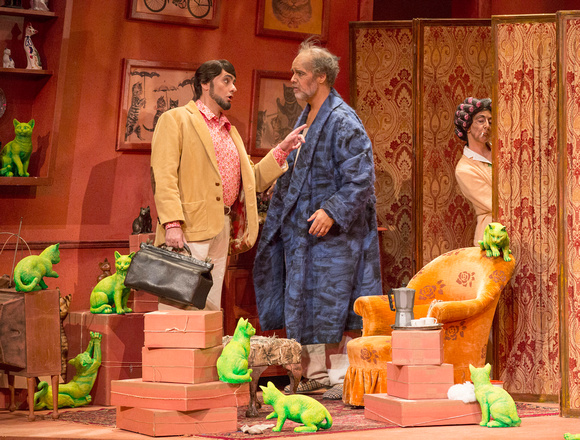 Don Pasquale (Italian pronunciation: [dɔm paˈskwaːle]) is an opera buffa, or comic opera, in three acts by Gaetano Donizetti with an Italian libretto completed largely by Giovanni Ruffini as well as the composer. It was based on a libretto by Angelo Anelli for Stefano Pavesi's opera Ser Marcantonio written in 1810[1] but, on the published libretto, the author appears as "M.A."
Donizetti so dominated the preparation of the libretto that Ruffini refused to allow his name to be put on the score. This resulted in confusion over the identity of the librettist for more than half a century,[2] but as Herbert Weinstock establishes, it was largely Ruffini's work and, in withholding his name from it as librettist, "Donizetti or [his assistant]‌ Accursi may have thought that, lacking Ruffini's name, the authorship might as well be assigned to Accursi's initials as to a pseudonym".[3]
The opera was first performed on 3 January 1843 by the Théâtre-Italien at the Salle Ventadour in Paris with great success[4] and it is generally regarded as being the high point of the 19th century opera buffa tradition and, in fact, marking its ending

Performance history
At its premiere Don Pasquale was performed by four of the most celebrated singers of the day[11] and was an immediate success. It was recognized at the time as Donizetti's comic masterpiece[14] and, to this day, is still considered as such. Pasquale remains one of the most popular of his 66 operas,[15] as well as being one of the three most popular Italian comic operas, the others being Rossini's The Barber of Seville and Donizetti's own L'elisir d'amore
The first performance in Italy was at La Scala, Milan on 17 April 1843 with Ottavia Malvani (Norina), Napoleone Rossi (Pasquale), Leone Corelli (Ernesto), and Achille De Bassini(Malatesta). Its first performance in Vienna was at the Kärtnertortheater (in Italian) on 14 May 1843, a production in which Donizetti participated and added the comic baritone duet "Cheti, cheti, immantinente" from a discarded portion of his unperformed opera L'ange de Nisida.In England it was first presented on 29 June 1843 at Her Majesty's Theatre in London (in Italian).
The opera was translated into French by Gustave Vaëz and Alphonse Royer and given in Brussels on 11 August 1843, Lille on 9 November 1843, and at the Théâtre d'Orléans in New Orleans on 7 January 1845. The first Australian performance was presented in Sydney on 12 October 1854 at the Royal Victoria Theatre.
In the years since World War II, the opera has been given frequently. Specifically, as is noted on Operabase, since January 2012 it has been given 401 performances of 75 productions in 66 cities and, therefore, it can be regarded as being part of the standard repertoire.
New Times
Donizetti’s delightful Don Pasquale is one of the pillars of Italian comic opera, and in this acclaimed Scottish Opera production, South Florida audiences will have a light-hearted opportunity to experience it from a fresh viewpoint. With irresistible eccentric characters, fabulous music, and plenty of laughs, director Renaud Doucet and designer André Barbe return with their colorful and quirky style. Set in Rome at the cusp of the Swinging Sixties, it's the perfect setting for a colossal clash of the generations. There’s no fool like an old fool, particularly when it comes to love and money. Don Pasquale, a reclusive old man with a penchant for cats, runs his pensione with only a chain-smoking chambermaid, a greasy cook, and an ancient porter for company. Worried that his wealth will be squandered by his scheming nephew Ernesto, Pasquale determines to find himself a wife. When a distinctly feline young lady conveniently turns up, he is smitten. But having a wife is not quite as straightforward as he expected. Has Ernesto got the better of the old curmudgeon at last? From melodic arias to punchy patter and sparkling humor, Donizetti's music brings this comedic masterpiece to life.
Daniel Azoulay and Florida Grand Opera
Powered by ZENFOLIO User Agreement
Cancel
Continue