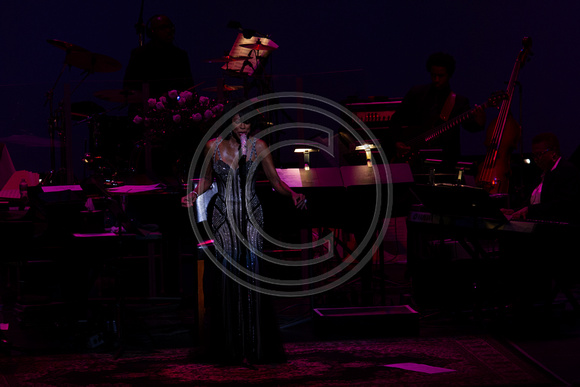 One of the most successful vocal stylists of our time, Natalie Cole’s career spans more than 35 years. She won her first Grammy Awards in 1975 for Best New Artist and Best Female R & B Vocal Performance, followed the next year with another win as Best Female R & B Vocal Performance for “Sophisticated Lady (She’s A Different Lady).” Her release “Unforgettable: With Love,” also picked up the music industry’s top award for Album of the Year, Best Traditional Pop Vocal Performance and Record of the Year prior to later wins in the 1990s for Best Jazz Vocal and Best Pop Collaboration with Vocals.
With more than 20 releases that cross over between R&B, soul, pop, gospel and adult contemporary, Cole has topped the charts with hits which include “This Will Be (An Everlasting Love),” “I’ve Got Love On My Mind,” “Wild Women Do,” “Miss You Like Crazy” and the electronically-created duets “Unforgettable” and “When I Fall In Love,” sung with Cole’s father, Nat King Cole. Her latest album “Still Unforgettable” was released in 2008 and garnered her two Grammy awards for Best Traditional Pop Vocal Album and Best Instrumental Accompanying Vocalist, as well as a NAACP Award for Best Jazz Artist.
In comparing Cole to her father, the L.A. Times says, “She clearly inherited Nat King Cole’s effortlessness as a singer.”

“The Arsht center family expresses its condolences to the Cole family. We believe the world has lost an outstanding musical talent with the passing of Ms. Cole,” said Suzette Espinosa, the center’s vice president of public relations.