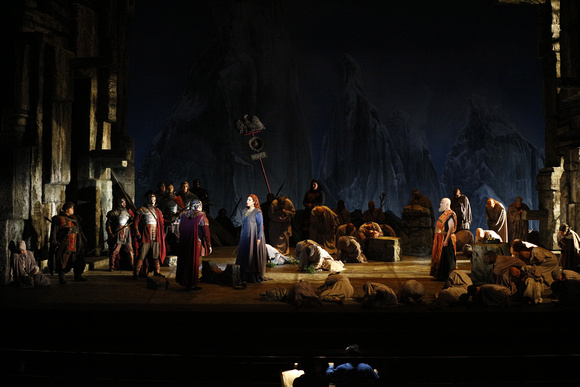 Norma (Italian: [ˈnɔrma]) is a tragedia lirica or opera in two acts by Vincenzo Bellini with libretto by Felice Romani after Norma, ou L'infanticide (Norma, or The Infanticide) by Alexandre Soumet. It was first produced at La Scala in Milan on 26 December 1831.
The opera is regarded as a leading example of the bel canto genre, and the soprano prayer Casta diva in Act I is a famous piece. Notable exponents of the title role in the post-war period have been Maria Callas, Joan Sutherland, Montserrat Caballé and, in the 2007, Biondi-Minasi critical edition based on Bellini's autograph score, Cecilia Bartoli.

Composition history
Crivelli and Company were managing both La Scala and La Fenice in Venice, and as a result, in April–May 1830 Bellini was able to negotiate a contract with them for two operas, one at each theatre. The opera for December 1831 at La Scala became Norma and while the one for the 1832 Carnival season at La Fenice became Beatrice di Tenda.[1]
With Bellini's La sonnambula successfully staged in March 1831 and Giuditta Pasta having demonstrated her extensive vocal and dramatic ranges in creating the role of Amina, the Swiss village maiden, she had been engaged by La Scala for her debut during the following season. Bellini and Romani then began to consider the subject of the coming autumn's opera. By the summer, they had decided to base it on Alexandre Soumet's play which was being performed in Paris at around that time and which Pasta would have seen.
For the forthcoming autumn/winter season, La Scala had engaged Giulia Grisi (the sister of Giuditta Grisi) and the well-known tenor Domenico Donzelli, who had made a name for himself with Rossini roles, especially that of Otello. They would fill the roles of Adalgisa and Pollione. Donzelli provided Bellini with precise details of his vocal capabilities which were confirmed by a report which the Neapolitan composer Saverio Mercadante also provided. By the end of August it appears that Romani had completed a considerable amount of the libretto, enough at least to allow Bellini to begin work, which he certainly did in the first weeks of September as the verses were supplied.[2] He reported in a letter to Pasta on 1 September:
I hope that you will find this subject to your liking. Romani believes it to be very effective, and precisely because of the all-inclusive character for you, which is that of Norma. He will manipulate the situations so that they will not resemble other subjects at all, and he will retouch, even change, the characters to produce more effect, if need be.[3]
Norma was completed by about the end of November. While, for Romani, it became "the most beautiful rose in the garland" of all his work with Bellini,[4] it was not achieved without some struggles. Bellini, now at the height of his powers, was very demanding of his librettist and required many re-writes before he was satisfied enough to set it to music.

Premiere performances
After rehearsals began on 5 December, Pasta balked at singing the Casta diva in act 1, now one of the most famous arias of the nineteenth century. She felt that it was "ill adapted to her vocal abilities",[6] but Bellini was able to persuade her to keep trying for a week, after which she adapted to it and confessed her earlier error.[7] At the opening night, the opera was received with what Weinstock describes as "chill indifference".[8] To his friend Francesco Florimo, on the night of the premiere, Bellini wrote "Fiasco! Fiasco! Solemn fiasco!" and proceeded to tell him of the indifference of the audience and how it affected him.[9]
In addition, in a letter to his uncle on 28 December, Bellini tried to explain the reasons for the reactions. As other commentators have also noted, some problems were innate to the structure and content of the opera, while others were external to it. Bellini discusses the tiredness of the singers (after rehearsing the entire second act on the day of the premiere) as well as noting how certain numbers failed to please—and failed to please the composer as well! But then he explains that most of the second act was very effective. It appears from the letter that the second evening's performance was more successful and Weinstock reports it was from this performance forward that it "was recognised as a successful and important opera" with 208 performances given at La Scala alone by the end of the 19th century.[10]
Among the external reasons, Bellini cited the adverse reaction caused by "hostile factions in the audience"[5] consisting of both the owner of a journal (and his claque) and also of "a very rich woman", who is identified by Weinstock as Contessa Giulia Samoyloff, the mistress of the composer Giovanni Pacini. On Bellini's part, there had long been a feeling of rivalry with Pacini ever since the failure of his own Zaira in Parma and his return to Milan in June 1829. With no firm contract for a new opera for Bellini, Pacini's success with his Il Talismano at La Scala—where it received 16 performances—fueled this rivalry, at least in Bellini's head. It was only when he staged a triumphant revival of his own with Il pirata with the original cast that he felt vindicated. Pirata received 24 consecutive performances between 16 July and 23 August 1829, thus outnumbering those for Pacini's opera.[11] However, Bellini also noted that on the second performance evening of Norma, the theatre was full.[12]
In all, Norma was given 34 performances in its first season at La Scala, and reports from elsewhere, especially those from Bergamo, when it was staged in late 1832, suggested that it was becoming more and more popular. Between 1831 and 1850 Weinstock provides details of the dozens of performances given in numerous cities outside of Italy, and then he gives details of those beyond.[13]
Bellini left Milan for Naples, and then Sicily, on 5 January 1832 and, for the first time since 1827, 1832 became a year in which he did not write an opera.[14] Norma quickly "[conquered] the whole of Europe in the space of a few years"
Daniel Azoulay and Florida Grand Opera
Powered by ZENFOLIO User Agreement
Cancel
Continue