Rubies All JGP Not CC 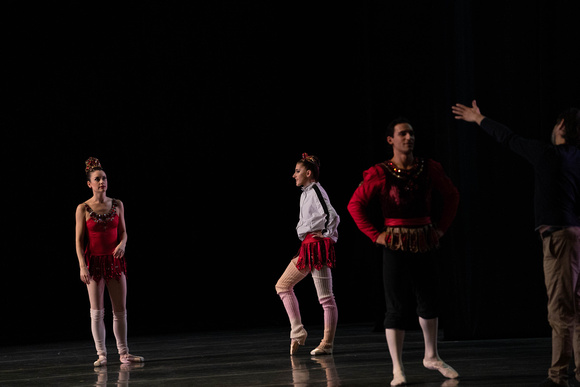 Rubies, Balanchine is said to have been influenced to create his three-part plotless ballet after a visit to jewelers Van Cleef & Arpels. Balanchine created his triptych composed of "Emeralds," “Rubies” and “Diamonds.” He did not give his ballet a title and it was the critic Clive Barnes who collectively named it “The Jewels” which was said to have been Balanchine’s working title.“Rubies,” the second piece of the triptych, is Balanchine’s tribute to his adopted country and especially to the spirit and energy of New York City. “Rubies” radiate this energy with its fast-paced steps and jazzy wit set to the music of Igor Stravinsky. Balanchine’s choreography captures the quintessence of Broadway musicals. The fusion between Stravinsky’s score and Balanchine’s choreography is scintillating.

Balanchine was born in Saint Petersburg, Russia and “Diamonds” pays homage to his native land. “Diamonds” may be viewed as a commentary on the Russian school of ballet. The score is by Tchaikovsky, the composer of some of the world’s most famous ballets: "Swan Lake," "Sleeping Beauty," and "The Nutcracker." “Diamonds” seems to recall Balanchine’s youth and the grandeur of Saint Petersburg, the Mariinsky Theatre, and the Imperial Ballet School, where he trained. The ballet was made for Suzanne Farrell, who was, at the time, Balanchine’s leading muse.

Making an analogy to gemstones seems appropriate here as “Jewels “ sparkle in its brilliance.
Edward Villella founded Miami City Ballet in 1986 and led it to become one of the country’s top ten ballet companies before his departure in 2012. Through his longtime association as a star of the New York City Ballet and the originator of many roles in George Balanchine ballets (including the male lead in Rubies), Villella acquired many masterworks from the Balanchine canon, such as Square Dance. After an absence of nearly 20 years, Miami City Ballet returned to Jacob’s Pillow in 2017 und
daniel azoulay
Powered by ZENFOLIO User Agreement
Cancel
Continue