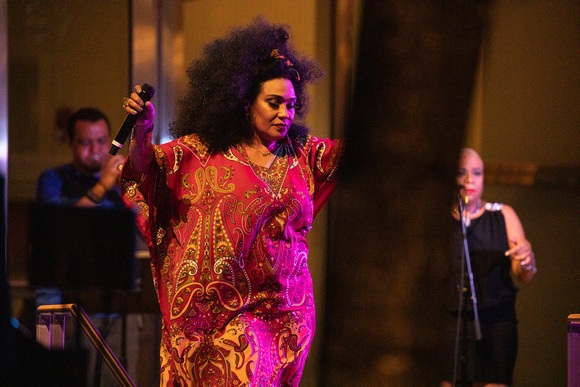 She has performed across the globe including Cuba, Mexico, Chile, Argentina, Uruguay, Panama, Brazil, Spain, Italy, France, Hungary, and in various major venues in the United States including Madison Square Garden and others.

Salsa Giants World Tour with Sergio George, Omara Portuondo, Diego El Cigala, Fania All Stars, Chucho Valdés, Gloria Gaynor, Johnny Ventura, Oscar D’León, Rey Ruiz, Cheo Feliciano, Rubén Blades, Amaury Gutiérrez, Luis Enrique, “Guantanamera” of “Playing for Change” and many more. Aymée is a Latin Grammy 2014 and Grammy 2015 nominated with the album “First Class to Havana” (Best Tropical Album) and a featured artist on a few Grammy Winners Albums like “No quiero Llanto” From El Septeto Santiaguero 2016, among others; also, she was nominated to Cubadisco in 2014, 2015, 2016 for best songwriter artist and Best Popular Album with her albums “En la Intimidad”, “First Class to Havana” and “El regreso a la Habana” produced by master Sergio George. In 2015, she was invited to participate in the most important audiovisuals event in Puerto Rico, "EL Especial del Banco Popular". Aymée closed with an homage to Celia Cruz the first "Latinamerican Music Awards" show in 2015 and 2016 with “Bailando todo se olvida” - Single that reached #1 Tropical Billboard List- at the landmark Dolby Theatre in Los Angeles, both events brought to the screen by the Telemundo NBC. She also has been involved as an actress and singer in Hollywood Production named "Double Play" Directed by Ernest Dickerson. She was part of the roster of the very prestigious North Sea Jazz Festival of Curacao-2016. She was one of the Highlights artist of the North Sea Jazz Fest in Rotterdam 2017. Also, Aymée has the honor to be the Protagonist in the telenovela about the life of Celia Cruz that will be on air in United States by Telemundo and in 45 other countries p
Daniel Azoulay
Powered by ZENFOLIO User Agreement
Cancel
Continue