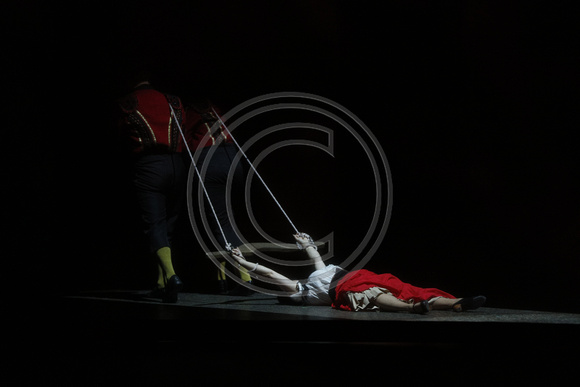 Carmen (French pronunciation: ​[kaʁmɛn]; Spanish: [ˈkarmen]) is an opera in four acts by French composer Georges Bizet. The librettowas written by Henri Meilhac and Ludovic Halévy, based on a novella of the same title by Prosper Mérimée. The opera was first performed at the Opéra-Comique in Paris on 3 March 1875, where its breaking of conventions shocked and scandalized its first audiences.
Bizet died suddenly after the 33rd performance, unaware that the work would achieve international acclaim within the following ten years. Carmen has since become one of the most popular and frequently performed operas in the classical canon; the "Habanera" from act 1 and the "Toreador Song" from act 2 are among the best known of all operatic arias.
The opera is written in the genre of opéra comique with musical numbers separated by dialogue. It is set in southern Spain and tells the story of the downfall of Don José, a naïve soldier who is seduced by the wiles of the fiery gypsy Carmen. José abandons his childhood sweetheart and deserts from his military duties, yet loses Carmen's love to the glamorous matador Escamillo, after which José kills her in a jealous rage. The depictions of proletarian life, immorality, and lawlessness, and the tragic death of the main character on stage, broke new ground in French opera and were highly controversial.
After the premiere, most reviews were critical, and the French public was generally indifferent. Carmen initially gained its reputation through a series of productions outside France, and was not revived in Paris until 1883. Thereafter, it rapidly acquired popularity at home and abroad. Later commentators have asserted that Carmen forms the bridge between the tradition of opéra comique and the realism or verismo that characterised late 19th-century Italian opera.
The music of Carmen has since been widely acclaimed for brilliance of melody, harmony, atmosphere, and orchestration, and for the skill with which Bizet musically represented the emotions and suffering of his characters. After the composer's death, the score was subject to significant amendment, including the introduction of recitative in place of the original dialogue; there is no standard edition of the opera, and different views exist as to what versions best express Bizet's intentions. The opera has been recorded many times since the first acoustical recording in 1908, and the story has been the subject of many screen and stage adaptations

Prosper Mérimée, whose novella Carmen of 1845 inspired the opera
In the Paris of the 1860s, despite being a Prix de Rome laureate, Bizet struggled to get his stage works performed. The capital's two main state-funded opera houses—the Opéra and the Opéra-Comique—followed conservative repertoires that restricted opportunities for young native talent. Bizet's professional relationship with Léon Carvalho, manager of the independent Théâtre Lyrique company, enabled him to bring to the stage two full-scale operas, Les pêcheurs de perles (1863) and La jolie fille de Perth (1867), but neither enjoyed much public success.

When artistic life in Paris resumed after the Franco-Prussian War of 1870–71, Bizet found wider opportunities for the performance of his works; his one-act opera Djamileh opened at the Opéra-Comique in May 1872. Although this failed and was withdrawn after 11 performances, it led to a further commission from the theatre, this time for a full-length opera for which Henri Meilhac and Ludovic Halévy would provide the libretto.[5] Halévy, who had written the text for Bizet's student opera Le docteur Miracle (1856), was a cousin of Bizet's wife, Geneviève; he and Meilhac had a solid reputation as the librettists of many of Jacques Offenbach's operettas.

Bizet was delighted with the Opéra-Comique commission, and expressed to his friend Edmund Galabert his satisfaction in "the absolute certainty of having found my path".[5] The subject of the projected work was a matter of discussion between composer, librettists and the Opéra-Comique management; Adolphe de Leuven, on behalf of the theatre, made several suggestions that were politely rejected. It was Bizet who first proposed an adaptation of Prosper Mérimée's novella Carmen. Mérimée's story is a blend of travelogue and adventure yarn, possibly inspired by the writer's lengthy travels in Spain in 1830, and had originally been published in 1845 in the journal Revue des deux Mondes. It may have been influenced in part by Alexander Pushkin's 1824 poem "The Gypsies", a work Mérimée had translated into French; it has also been suggested that the story was developed from an incident told to Mérimée by his friend the Countess Montijo.Bizet may first have encountered the story during his Rome sojourn of 1858–60, since his journals record Mérimée as one of the writers whose works he absorbed in those years
Daniel Azoulay and Florida Grand Opera
Powered by ZENFOLIO User Agreement
Cancel
Continue