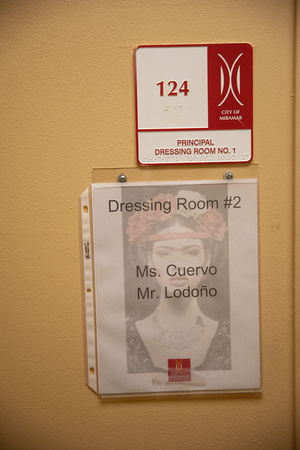 For its upcoming production of “Frida,” Florida Grand Opera found a critically lauded, Colombian-Lebanese soprano, raised on the music of her great-aunt, famed coloratura soprano Alba del Castillo, who also is a heavy-metal guitarist and got her start in Miami as a fashion model and belly dancer. Such unconventional passions may make Catalina Cuervo the perfect Frida. And, she would argue, it is the perfect time.

“Sometimes Latinos can be portrayed in a very negative way, in the current mood, like we bring negative things to the country. It’s time for us to celebrate a woman who was all about love and art and giving back to the people, and also a woman who was so proud to be Mexican,” Cuervo says.

Consistent with the sensual aesthetic that defined the lives of Kahlo and Rivera, the opera contains suggestive themes, graphic scenes and partial nudity.

Other upcoming performances of “Frida” will be on March 21, 23-24 at Miami-Dade County Auditorium, and March 28 and 30 at Fort Lauderdale’s Parker Playhouse.

Cuervo is no stranger to the role, which has earned her consistently glowing reviews. The Cincinnati Enquirer described a 2017 performance as “nothing short of a tour-de-force. She inhabited Frida’s persona comple
Daniel Azoulay
Powered by ZENFOLIO User Agreement
Cancel
Continue